Forty leaders of the shelter and gender equality movement in Asia met in the Hague, the Netherlands on November 2-3, 2015, to discuss the status of women’s empowerment in the region.

On the eve of the Third World Conference of Women’s Shelters on November 2, Asian delegates gathered at the Centrum Quadraat meeting room in the historic center of the Hague to discuss developments in shelter work in the region, progress toward building the economic capacity of survivors to find jobs and housing after they leave the shelters, and strategies to help migrant women and other marginalized groups be free of the fear of violence.

Some key issues which emerged in the meeting were:

The chairperson of the Asian Network of Women’s Shelters, which organized the event, Chi Hui-Jung said Asia, as was the world’s most diverse region, could show the world how a strong network of different peoples can come together to help women and girls be free of violence and abuse.

Ivy Josiah, Former Executive Director, WAO Malaysia talked about ethnic tensions in Malaysia and problems with husbands converting to Islam and taking domestic violence cases to the Sharia court. Ivy also stressed how important it was for NGOs to collect data for advocacy and fundraising, and also to improve accountability: “We need documented and data-evidence proof work to convince people,” Ivy said.

Rabeea Hadi, Director of Advocacy and EVAW at Pakistan’s Aurat Foundation, said, “Economic empowerment is very important, especially for women who leave the shelter after 3-4 months and are left in no-man’s land.”

Chisato Kitanaka, Executive Director of the All Japan Women’s Shelter Network, presented the results of a comparative survey on Taiwan, Japan and Malaysia. She said Taiwan had the most complete shelter system, and was particularly impressed that social workers were employed in shelters in Taiwan, which is not possible in Japan. 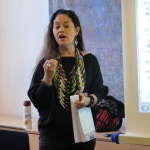 Monique Wilson, Director of the One Billion Rising (OBR) campaign said aside from the main theme of “Revolution”, the focus of the movement next year will be on marginalized women. Monique added, “Grassroots organizations have led OBR so far, so we need to give a platform to the people who are least visible in society.”

Lorraine Lim, Administrator and Counsellor the Star Shelter SCWO in Singapore said, “Many migrants do not know that domestic violence is a crime, let alone where to go to report it.” Her organization, the Singapore Council of Women’s Organisations (SCWO) recommends residency rights could be sponsored by a relative or friend and not just the spouse of a migrant.

The ANWS board met during lunchtime and reported back to the conference in the afternoon, urging participants to sign up as members of ANWS on the website. On November 3, participants went on a study visit of the Hague city government and a local shelter for young pregnant women and mothers.

Christy Cheng
Secretariat of the Asian Network of Women’s Shelters
c/o The Garden of Hope Foundation,

The Garden of Hope Foundation